This evening which is New Year’s Eve 2019,  I have been reminiscing about the Past Two Decades.

Especially one select story from #1999:

It was #NewYearsEve1999, and at the time I was the Director of Sales for the #WarwickNewYork. You may recall that throughout the year of 1999 we often heard about #Y2K from the #Media.   Especially, leading up to #theYear2000.  At the time, I was living in #MiddleVillage, NY and had gone home to get my #ShihTzu #Dog,  Mr. Sunshine to  accompany me to the  #WarwickHotelNY, as on I had been selected as #MOD (#ManagerOnDuty) that evening.  #MrSunshine & I hunkered down in my office overlooking the corner of 54th & Sixth Avenue.  Hotels.com had just started to go online, and the Warwick NY was competing with the surrounding hotels on rates (#ThePlaza, #ParkerMeridien, etc) on rates in general, however, we now had a #NewCompetitor #Hotels.com.    In the late 90’s Revenue Managers had just started to become popular, and in 1999 the WarwickNY did not have a Revenue Manager. Therefore,  it remained as the job of the DOSM to change the rates (which appeared online to Travel Agents (aka the #GDS). During the late90’s (1997-99) rates were changing rapidly due to low occupancy in NYC, in addition to our new online competition.   Finally, on New Year’s Eve of 1999 – the clock struck 12AM the year of 2000 began and the noise from Times Square ensued, Midnight came and went & To my surprise, nothing blew up as predicted – which meant that once again – it was NOT “The End of the World, and NYC did not explode nor did our computers.

Many things have changed since that memorable night, and after leaving the #WarwickNewYork I had an opportunity to open a #SmallLuxuryHotel, now known as the #DelamarGreenwichHarbor, in #Greenwich #Connecticut, and in 2002 I developed #TheCarrollGroup.  Needless to say, it’s been an interesting journey. @TheCarrollGrp has had the honor of representing various #LuxuryHotels&Resorts in some of the most beautiful parts of the world (#Europe, #Mexico, and #Central & #North America).

Due to the turbulent years of #2007, #2008 ++ some hotel properties have closed, others have been sold and a select few remain.  In 2020, I am looking forward to sharing more of the journey which my family and I have experienced over the past 30+ years in Hotel & Travel Business, Our Industry &   the world continues to change rapidly. In 2020, @TheCarrollGrp looks forward to continuing our work with a select group of the World’s most #Unique & #Independent #LuxuryHotels & #Resorts, along with the opportunity of welcoming some new #properties to our collection.  Happy New Year – Here’s to an abundant and prosperous Year ahead for all!

Coinciding with the end of the summer season in Bellagio, is The 17th Edition of Trofeo Grand Hotel Villa Serbelloni –also known as the “ traditional Lake Como Regatta” featuring vintage sailboats (classic small and medium-sized). This 3 days event is an opportunity to see old traditional boats sailing on the shores of Lake Como. The program for participants includes brunches in Pescallo, an opening dinner at the Sporting Club in Bellagio, and a gala dinner in the luxurious Salone Reale at the Grand Hotel Villa Serbelloni. (in previous years, more than 140 people were in attendance). 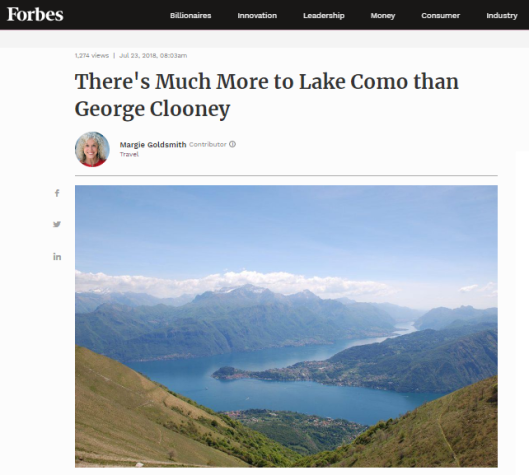 Explore Lake Como through the eyes of travel writer Margie Goldsmith and imagine yourself enjoying the magnificence of Bellagio.

A long-standing family of hoteliers and one of the most prestigious Grand Hotels in the world have been together for 100 years.

2018 marks 100 years of Ownership, Hospitality & Modernity of amenities and cuisine by The Bucher Family.

In 1918, at the end of the First World War, Swiss businessman Arturo Bucher purchased an elegant hotel located in one of the most fascinating spots in Italy: Bellagio, a medieval village lying on the tip of the promontory that separates Lake Como’s two branches.

And so began the story of the Bucher family’s ownership of the Grand Hotel Villa Serbelloni, which is today considered one of the most prestigious hotels in the world.

Right now in 2018, The Bucher Family is celebrating 100 years and three generations of ownership which started with Arturo and continued with Rudy and Gianfranco Bucher, the current owner.

The family still resides in the hotel, and Gianfranco Bucher deserves full credit for the long-sighted modernization that the 19th-century villa has undergone in the last 20 years, which has made it a modern luxury hotel without losing its elegant, aristocratic atmosphere. In the past 100 years, this environment has also enchanted royals and heads of state, show business celebrities, science and art world personalities, and many other VIPs. The hotel has 95 rooms, including 22 suites, two of which are named after their perhaps most illustrious guests: “Winston Churchill” and “John Kennedy”.

In celebration of the centenary, the Bucher family will publish a book on their history. The Grand Hotel Villa Serbelloni is also hosting art exhibitions, as well as two concerts of the Festival of Bellagio and Lake Como.

Chef Ettore Bocchia has created a special historical menu, which is now being served at the Michelin-starred Mistral Restaurant.

For the occasion, a celebratory 20th-century style “Afiche (special logo)” will be the hotel and the two restaurants’ signature for the entire duration of the 2018 season. In the words of Gianfranco Bucher:  The “afiche” celebrates our first 100 years, in the hope ours will continue to be a successful and lasting history.”  Indeed, Gianfranco and Dusia Bucher’s sons are preparing to take the reins of the hotel for the second century of this important family history.

The 2018 season started on March 29 and will end on the 04th of November 2018. * Right now the seasonal reopening for 2019 is tentatively scheduled for April 11, check with your Luxury Travel Specialist or Reservations at www.villaserbelloni.com for more info!

“Organic cuisine, a jungle spa environment and views from the infinity pool out to the Caribbean Sea” are just some of the delights enjoyed by guests of Casa Bonita in the Dominican Republic.

Explore old world Caribbean with Meagan Drillinger in her article Uncharted adventures in Dominican Republic and imagine an off the beaten path adventure in the jungles of Barahona.